How to Identify Collectible Enamel

First used on small pieces of jewelry, enamel is not paint but a thin coat of glass. Once applied to a metal and heated to high temperatures, will melt and become fused to the metal. This is similar to how ceramic glazes adhere to pottery. Pure gold, silver and copper were traditionally the only metals used in the enameling process. 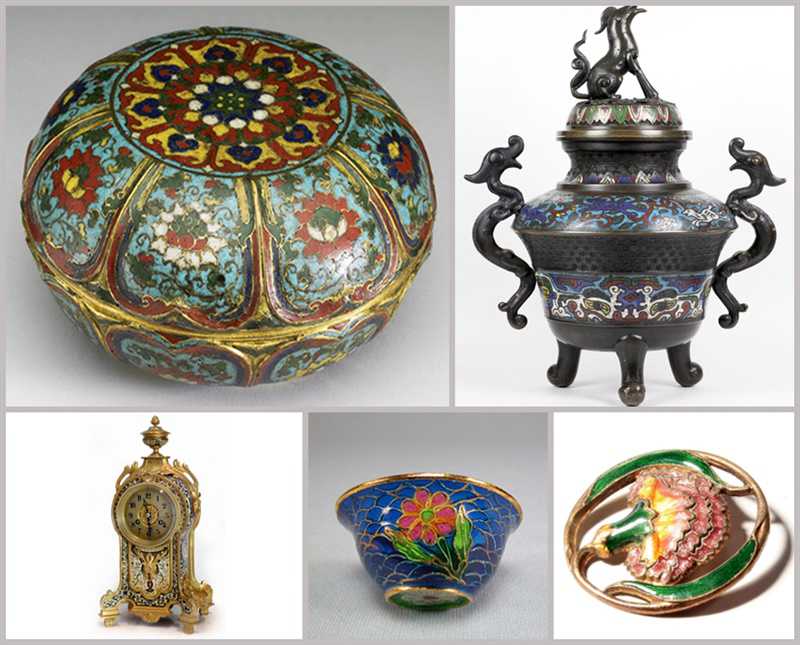 Enamel glass is a compound of flint or sand, red lead, and soda or potash. These materials are melted together, producing a substance known as flux or frit. The flux’s hardness depends on the proportions of the components in the mix.

Enamels are termed ‘hard’ when the temperature required to fuse them is very high; the harder the enamel is, the stronger and more durable it will be. ‘Soft’ enamels require less heat to fire them and consequently are more convenient to use, but they do not wear so well, especially if subjected to friction.

Cloisonné: Enameling was practiced as early as the 5th century B.C. by the ancient Greeks, and it was the Greeks who developed the most well-known technique of enameling, cloisonné. The technique of cloisonné enamel is produced by by soldering flat metal strips to the surface of the piece, creating a groove. These are then filled with the enamel, and the piece is then fired until the enamel fuses. When cooled, the surface of the object is polished. Modern Chinese cloisonné is probably the most well known however, Chinese cloisonné ware isn’t the only collectable or desirable form of cloisonné. Russian cloisonné from the Tsarist era is also highly prized by collectors.

Champlevé: Unlike cloisonné, champlevé is a technique in which grooves are carved or cast into the surface of a metal object, and filled with enamel and fired like cloisonné. Consistent and frequent use of the champlevé technique is first seen in early Celtic art in Europe, from the 3rd or 2nd century BC. Later, champlevé is especially associated with Romanesque art.

Distinguishing between antique and modern enamel can be a very complex process. Even experts can be led astray, and without a trained eye, evaluating these pieces is difficult. An antique Chinese vase was sold recently by Potburys, a UK auction house, for 31,000 pounds. Although it was first catalogued as 19th century, specialists later recognised the vase as a rare survivor from the reign of the emperor Qianlong.

Due to the difficulty in correctly identifying the collectible enamel, it is always a good idea to have a knowledgeable antique appraisal done by a professional broker who can tell you what your piece is and how much it is worth in the market. At Sarasota Antique Buyers, we offer the best price for antiques and tips for appraising enamel and many other collectible items that you might be looking to sell.

Trading Antiques & Keepsakes: What you need to know before hand
How to Deal with an Antique Buyer and Get the Most for Your Collections
Real Comparison Between Antique Evaluation V/S Appraisal V/S Liquidation?
American Art: 5 Key Factors to Determine Value of Art