Janet Scudder is an American sculptor who created a variety of artistic creations for both public institutions and private parties in the early 20th century. Scudder is best known for creating unique, ornamental garden sculptures, many of which were sought by wealthy Americans who wished to add them to the landscaped grounds of their lavish estates. Fortunately for sculpture fans, many of these famed garden sculptures can still be viewed on display today. 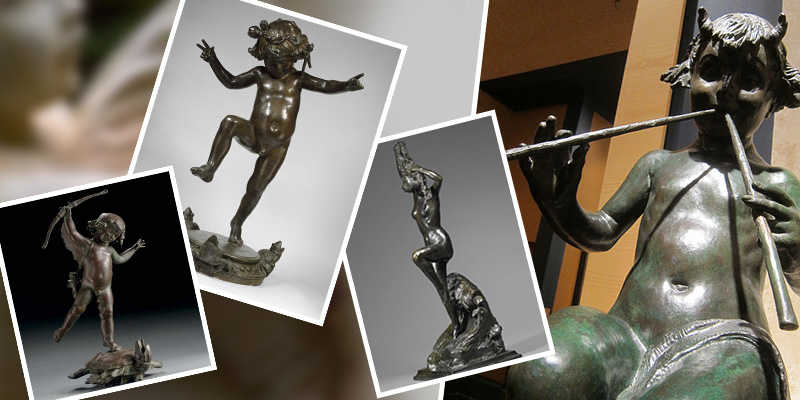 In “Seated Faun”, Scudder depicts a classic mythological feature that is part-goat, part-human. The figure is seated on a lion skin that has been draped on a square pedestal. He is shown playing two pipes – one in each hand – and his legs are crossed at the ankles. Scudder’s signature can be found along the bottom of the base on the right side, and it includes the date of the sculpture creation – 1924.

If you are hoping to catch a glimpse of “Seated Faun” in person, a cast is on exhibit on the fifth floor at the Brooklyn Museum.

Janet Scudder modeled her bronze sculpture “Frog Fountain” in Paris, and once completed, she brought it to New York to possibly attract commissions. Made out of bronze, the sculpture depicts a child-like character standing on a platform surrounded by three frogs. The dimensions measure 37.5 x 26 x 19 inches in size. A cast was purchased by architect Stanford White, who purchased it for his home on long island. Today, a cast of “Frog Fountain” is currently on view at The Met Fifth Avenue in Gallery 700.

Inspired by the Renaissance works that Scudder encountered during her time in Italy, “Tortoise Fountain” is a great example of the imaginative garden sculptures for which the artist is most well-known. This sculpture features a child balancing on one foot on the back of a turtle, with one arm holding a bow and extended upward.

Not only did Scudder have “Tortoise Fountain” cast in limited editions of four, but she also had smaller casts of about 18 inches produced. Today, some of these smaller sculptures can be found at The Baltimore Museum of Art, the Richmond Art Museum in Richmond, Indiana, and Brookgreen Gardens in Murrells Inlet, South Carolina.

The Little Lady of the Sea

“The Little Lady of the Sea” is a cast bronze fountain sculpture that Janet Scudder created in 1912. This garden sculpture features a nude female exiting from a small grotto and holding seaweed above her head. It was originally produced for “Villa Turicum” – the famed Lake Forest estate of Harold McCormick, and Scudder went on to create four pieces.

One of the four fountains was exhibited in Scudder’s first solo art show at Star Galleries in New York., where it was eventually sold. Another was exhibited at the Salon d’Automne in Paris, and one can currently be viewed on display at the Virginia Museum of Fine Arts in Richmond, VA. In 2013, one of the four statues sold for approximately $46,000 at auction, despite being green due to weather and soil exposure.