Charles Schreyvogel (1861-1912) was a prominent American painter of Old West subject matter during the days of the disappearing frontier, and he was especially intrigued by military life. Schreyvogel’s portrayals of cavalrymen and cowboys came from both firsthand experience and escapist fantasy. From 1893 to 1905, he made frequent visits to the Western U.S. collecting military and American Indian artifacts that he brought back to his Hoboken, New Jersey studio. These experiences helped him to create some of these prominent works of the Old West. 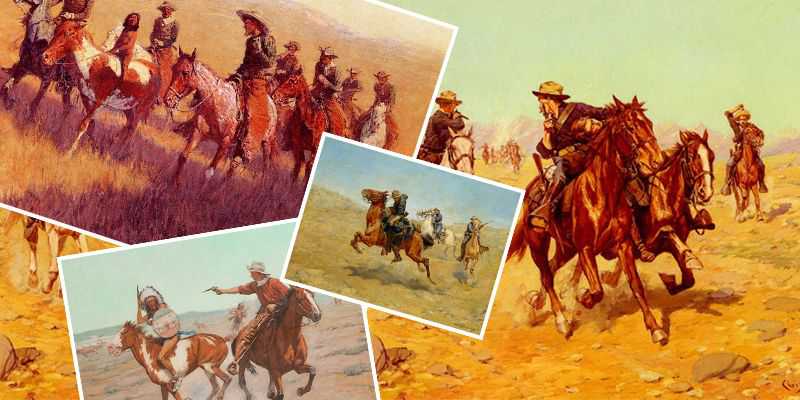 My Bunkie is one of Charles Schreyvogel’s most famous paintings, and it is based off of an event described to him by a veteran frontier trooper. The image depicts a soldier as he heroically rescues a bunkmate who has lost his horse in a skirmish with un-pictured American Indians. Two cavalrymen fire their weapons, covering for and protecting their fellow soldiers. It’s theme of comradeship in the image was compared to another famed Old West painter – Frederic Remington.

Saving the Dispatch is a prime example of Schreyvogel’s depiction of frontier warfare. This image shows the conflict between the Plain Indians and the Calvary. The painting was completed near the end of Schreyvogel’s career, and it shows in his painting style. His brushwork appears frenzied, creating the illusion of motion within his figures as well as a sense of urgency. The Calvary is shown riding away from the American Indians at full gallop, with each man turned around in a different direction in attempts to defend himself.

This 1900 oil painting is owned by The Met, and it depicts an American Indian on horseback. He is armed as he’s being pursued down a mountainside by several riders in the distance. The drama is amplified by the fact that the American Indian and his horse appear to be close to plunging into the viewer’s space. Plus, Schreyvogel paints this scene in a way that resembles an instant photo snapshot.

Charles Schreyvogel created Rescue at Summit Springs in 1908, and it was a large image measuring 48 x 66 inches. The image centered upon Buffalo Bill in one of the oldest traditions of American art and literature – the captivity narrative. Buffalo Bill appears as the man who saves a white woman from what is said to be a “fate a thousand times worse than death” after locating the camp at Summit Springs. Buffalo Bill Cody was a scout for the 5th Calvary and in this painting, he enacts the classic white American male hero role. Along with other paintings depicting his battles, Schreyvogel helped to develop the legend of Buffalo Bill.

Attack on the Herd

Attack on the Herd (Close Call) is fairly distinct when it comes to Schreyvogel’s work. This painting depicts the white protagonist as a cowboy rather than his typical cavalryman. In other ways, the image falls in line with other Schreyvogel works, as it isolates two individuals in a life-or-death battle. The cowboy has been separated from the herd by indigenous Americans, and images of stampeding cattle can be seen in the background.

What is Modern Art?
5 Expert Tips to Analyze the Antique Market
Art Deco Vs Art Moderne: Which One Do You Have?
The History of Asian Bronzes