Antique silver bowls hold a major place in human history. In fact, they’ve been in use for over 6,000 years, and evidence suggests that they predate even the use of eating utensils. Although, from what we know, the rulers of Ur were the first to use these vessels, they were far from the only ones, or the last. Evidence has been unearthed revealing that the ancient Greeks, Romans, Egyptians, and other cultures all had ways of hammering out bowls from this precious metal. 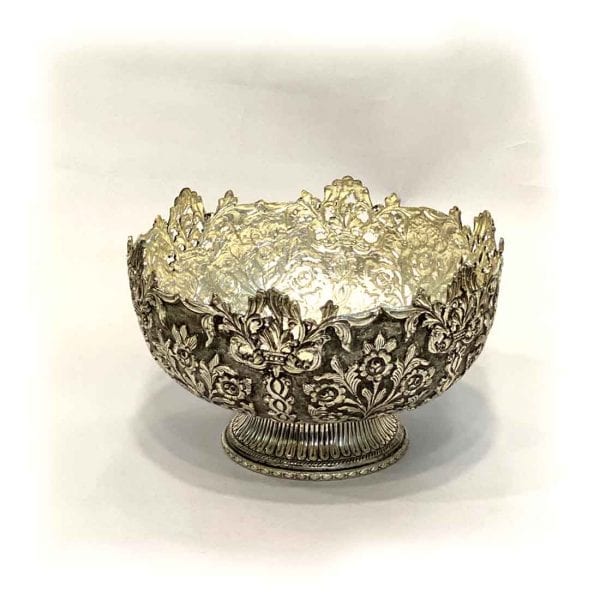 However this is just the beginning of the story that makes antique silver bowls so interesting to Orlando collectors. And while relics from the examples above are mostly found only in museums, more modern pieces from the 17th century on make a fascinating addition to any collection.

Because its pure form is typically too soft for common use, sterling silver is typically alloyed with 7.5% copper for added strength, although other metals can be used in its place.   For example, Argentum silver has appeared in recent decades, which replaces some of the alloyed copper with germanium. This allows for a millesimal fineness of 960, increases the alloy’s resistance to tarnish, and eliminates fire scale. However, because of the relative newness of these techniques, the antique silver bowls we typically buy in Orlando could not make use of them.

As any Orlando collector knows, antique silver bowls are rarely without ornamentation; they are often replete with detailed, artistic flourish.

While the methods were similar, antique silver bowls vary drastically across different regions and time periods. When meeting with clients, it’s interesting to see how something as simple as a punch bowl can vary so widely across cultures. A piece from England might depict dragons, or a coat of arms, while one from the Netherlands might feature tulips. There is also the monteith, a highly decorative, handled and footed style punch vessel with highly detailed, scalloped rim.