The History Behind Repousse Antiques

Repoussé is an intricate detail and ornamental design in sterling silver, metal, thin copper and many other metals. Repoussé designed pieces of silver are done by a metalwork technique that consists of the hammering and shaping of malleable metal on the reverse side by hand. The literal meaning of repoussé in French is “to push back.” The expression, design and uniqueness of repoussé makes any item created with that technique, a very unique piece that is highly desired by collectors. 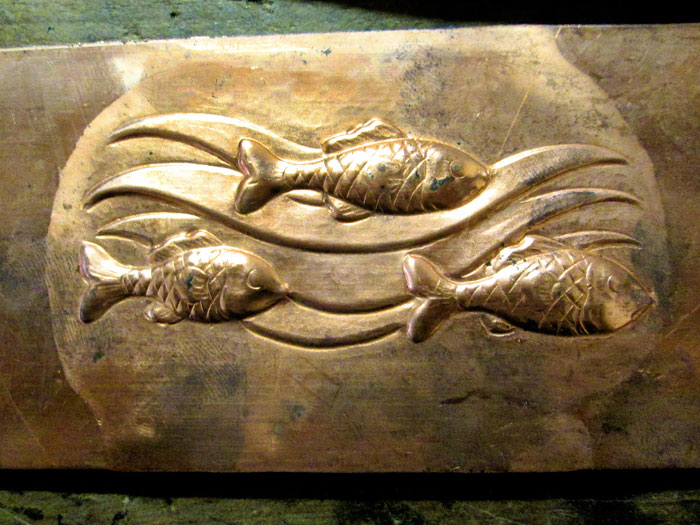 Where it all began

The techniques of repoussé date back to Antiquity. It was starting then that the techniques have been used widely with gold and silver for fine detailed work and also with copper, tin, and bronze for larger sculptures.

The origination of repoussé is credited to ancient civilizations.The finest examples of repoussé are represented in the famous work on bronze greek armour from either the 3rd or 4th century BC. Originally, production of these unique pieces were done with the support of a pitch, sand or sometimes just by the edges of the metal itself. Pitch is an ancient “basic” substance. It was commonly used for caulking boats and ships and was made of tree sap, pine tar or pine resin. Modern pitch is made of pine resin, as it was in the early days, but also waxes and fillers such as clay or sand. When working with steel, the pitch was made of lead but today, soft zinc or tin is a much better substitute. Work done on pitch for armour would only be the fine decoration accents, while the rest of the armour forming was done by other methods.

Thin copper was easily worked on with wooden hand tools while metal such as heavy steel would need something more and would be worked on with power tools and machines. The tools used really depended on the type of metal that was being used.

Because the process involves a lot of handwork, it was at this time that the repoussé technique was beginning to be streamlined so that repoussé products could be produced at semi-mass production levels. One technique for supporting semi-mass production was for the artist to develop a design or pattern into a stone, bone or other kind of metal and then press the gold sheet onto the stone so that the designs were imprinted. Then, the artist would put the final touches on the designs and patterns by hand.

The widespread use and practice of repoussé reached its peak in Europe during the 16th, 17th and 18th centuries. Today, the repoussé technique is not nearly practiced as much as it was in earlier centuries but it is still a technique that is being taught.

Discovering their Meaning and Markings

Gold and silver were frequently used in the past for very fine repoussé work. However, copper and tin are still very suitable metals to also withhold the intricacy of repoussé. Less commonly used and more likely to be associated with older repoussé work is copper. The markings and styles of repoussé work are very much dependent on the artist and the area of the world that the artist is from and it takes a true expert to really decipher the origin. Sometimes repoussé can get confused with embossing, however embossing is the process of creating the intricate ornamental designs by using dies. It is important to note the difference between repoussé and chasing. Chasing refers to a groove, furrow, channel or indentation in the metal.

One of the most popular and also the largest pieces ever created using the repoussé technique is the Statue of Liberty. To create the statue, it was formed by copper repoussé in many sections by wooden sculptures that were used to shape each piece during the hammering process. All of those pieces were then put together.

To really learn about the repoussé pieces that you have on hand and what they may be worth, bring your flatware, tea sets, bowls and water jugs to Sarasota Antique Buyers. We can help you discover where they are from, how old they are and the meanings behind the “lost art.” We visit places like Osprey, Ellinton and Palmetto once in a week to appraise antique items.

Trading Antiques & Keepsakes: What you need to know before hand
Do I Need An Antique Appraisal?
Complete Liquidation guide: Avoid Getting Gouged
How to Identify Collectible Enamel