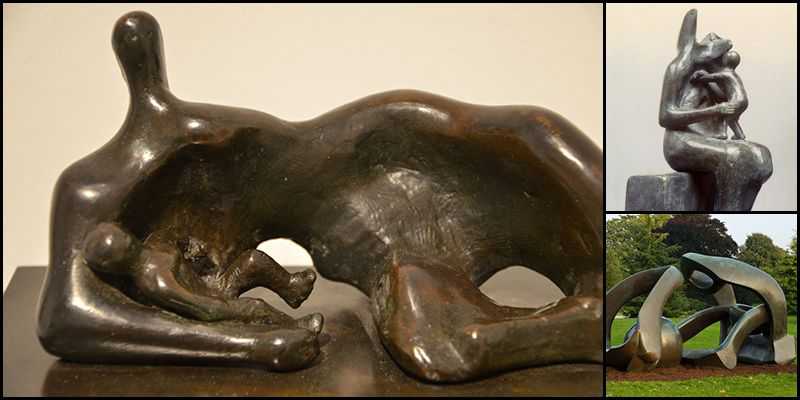 Born in 1898 in Castleford, Yorkshire, Henry Spencer Moore grew up to be an English sculptor and artist, and happened to be the most influential and famous sculptor of his generation. His father wanted to avoid having his children work in the mines and so he did everything he could to ensure his children were educated. Henry Moore developed an interest in art in his teenage years and his talent helped him get a scholarship to Castleford Secondary school. Continuing on his education at the Royal College of Art, Henry Moore’s unique and experimental style of art conflicted with his teachers as they tried to teach him the classic styles. Henry Moore was more interested in being spontaneous in his art while having some imperfections and that appeared in his sculptures. Throughout all of the work that Henry Moore did, he is best known for his abstract bronze sculptures which are located in various prominent public places.

Bronze is the most popular metal to use whenever an artist is casting metal sculptures. Most artists prefer bronze because it has the unique property of being able to expand slightly before the mold is set, which helps to fulfill final and subtle details within the mold. Then, once the metal cools, the bronze shrinks ever so slightly so that it is easily removed from the mold. Bronze is sturdy and ductile so it is ideal for artists who create figures that are acting out a movement. However, bronze is such a desired metal that its value has caused many ancient sculptures to be lost and destroyed to make weapons or ammunition in times of war.

Henry Moore was inspired in his own sculpting practice by studying the works of Michelangelo, Giotto di Bondone, Giovanni Pisano, and several other old masters. However, his ultimate influence on the direction that he took with his work came from the primitivism seen in the works from sculptors such as Constantin Brancusi, Jacob Epstein, Henri Gaudier-Brzeska and Frank Dobson. He took their technique and method of direct carving which then left marks in the metal and imperfections that were altogether a part of the unique finished product. Moore would chisel and whittle away at the block until there was a final sculpture.

What lead to Moore’s start of fame was the traditional commissions that came following World War II. Moore worked as a war artist and produced memorable sculptures such as images of people fleeing the Blitz in the London underground. Moore’s reputation took off and was awarded the International Sculpture Prize at the Venice Biennale in 1948. Some of his more famous sculptures include a reclining figure for UNESCO building in Paris, a nuclear energy sculpture at the University of Chicago (commemorating the 25th anniversary of nuclear reaction), Knife Edge which is a sculpture for College Green, London around Houses of parliament in 1962 and many more. As he matured through his practice, Moore was more interested in utilizing three dimensions. This led him to introduce holes in his sculptures which made it appear as though the object and sculpture was growing out of an absent center.

By the end of his life, Moore had become the voice of British sculpture, a worldwide celebrity, and a proponent of British modernism. His art inspired generations of artists and sculptors, although they all were constantly measured and compared to the work of Moore.