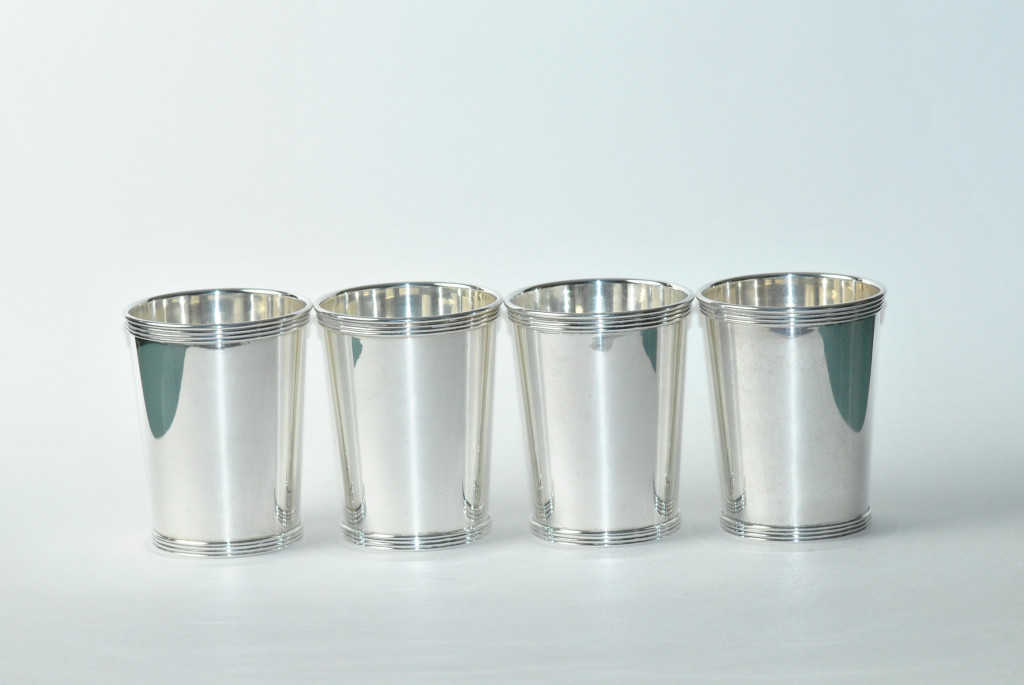 The Kentucky Derby and Southern Style

Long before the Kentucky Derby was even an idea, julep cups were created for the most well off families who lined the east coast and spread as far west as Kentucky, which at the time, was a county in Virginia. The sterling silver julep cups were collected and very coveted as early as the beginning of the 1800s. The silver julep cups can trace their history to the early silversmiths of America. Early master silver smiths, Asa Blanchard of Lexington, Kentucky and also William and Archibald Cooper of Louisville are credited with the sleek and classic design of the silver cup. Their design still very much influences the design of the silver julep cups that are used today.

The history of the sterling silver julep cup is deeply rooted in the south as the holder of the main southern drink of choice, mint juleps. Beyond holding a refreshing alcoholic beverage, the sterling silver julep cups are also historically used to hold water and they are even used for decoration on parlor tables, all throughout the southern homes.

Serving mint juleps was not a new concept at the time of the creation of silver julep cups. It is only after the 1938 Churchill Downs that the entire concept of mint julep cups being sold and used at races became a reality. This is because that year, the race switched to serving the drink in paper cups from tall water glasses because people kept stealing them. So, to combat this new trend, the race created a promotional piece to be sold instead, and therefore the Kentucky Derby Mint Julep Glass was born.

Most silver sterling julep cups have two different forms of markings. One form of markings is the beaded border and the other is the banded border, both at the top of the cup. The julep cups are made in sterling silver or a polished pewter.

Many people who own julep cups also claim that the styles and designs are specific to the southern state that the cup was manufactured in. The look of a Georgia julep cup is going to have a slightly different look than a cup that originated from Kentucky or Louisiana. The cups are often associated with achievement, prestige and high esteem. The sterling silver that the cup is made form is meant to increase the extravagance of the experience of having a wonderfully chilled drink on a hot day.

Because julep cups are frequently given, received and used for events such as christenings, weddings or anniversary gifts you might have received them at some point through all of your major life events. Also, the cups are very much used at horse races or fairs, especially throughout the state of Kentucky. Throughout history the cups have been given as gifts so often that you may have some sterling silver julep cups lying around your house that you never use. If you bring them into our store, we can tell you all about your sterling silver julep cups, where they originated from and what they are worth. Sarasota Antique Buyers buys sterling silver julep cups of all styles so bring your items in today.

Five Must-Have Antiques For Your Holiday Meals
Silver Markings: What do they Mean and How do I find Out
Tips on How to Sell Your Antique Silver Tea Set
Top Bought and Sold Antique Silver Pieces for Ideas | Antique Gift Ideas