The 5 Most Purchased And Valued Sterling Silver Trays

Sterling silver trays have a long beautiful history, often associated with tradition and classic elegance, class and beauty. Over the years, they have become the perfect gift at important ceremonial events such as weddings, christenings, and graduations, and they have found a special place in the homes of hundreds of thousands of people, whether it was an original gift or something that has been passed down in the family.

For the most part, sterling silver trays have two, opposing handles or none at all. Sometimes trays do not have handles when they are designed to hold a snuffer for a set of candlesticks, or if the tray is legged and shaped like the teapot so that a teapot can sit on top of it. In the United States, a sterling silver trays can be identified fairly easily because they are usually marked with either “STERLING,” “925,” or “925/1000.” Those silver markings help to let a purchaser know the value of their sterling tray, in addition to the origin, maker and year that the tray was made.

Common silver tray shapes are rectangular and circular but the come in a wide variety of sizes. The same can be said of design, which varies in terms of level of detail and the ornamental characteristics depending on the different historical periods. There are five sets of sterling silver trays that are considered the most valued and sought after trays, in the specific patterns: 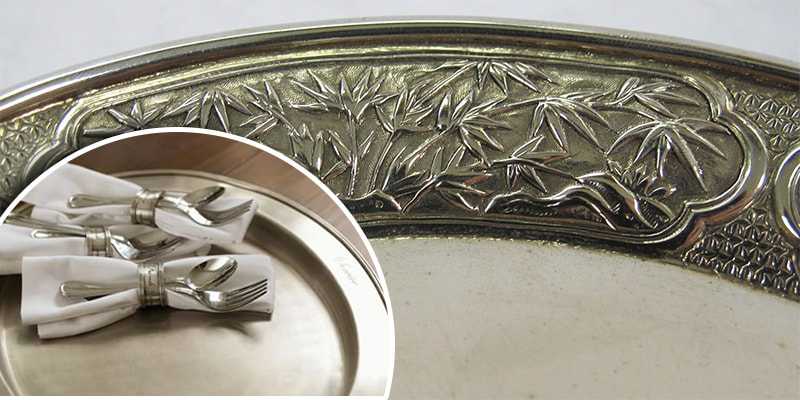 Identifying the Francis 1st pattern on sterling silver trays can be done because of the uniqueness of the fruit and flower cluster designs. Many claim that the design idea was inspired by many tableware patterns of the Italian silver manufacturer, Cesa 1882. The sterling silver trays are a great match to the other pieces that Reed & Barton created in this pattern, such as tea sets. The pattern can be identified from the original backstamp which features a lion, an eagle, and the letter “R.” Around 1950, a new backstamp was used and that read “Reed and Barton.”

Introduced in 1937, the Chippendale sterling silver tray pattern by Reed & Barton is a great combination of luxury and elegance. The signature border in this pattern is ornate and detailed while maintaining a simple and polished interior. Additionally, the curving leg of an 18th century chair is the inspiration for the beautiful curves in every detail of this sterling tray design. For example, only in Chippendale does the end of the handle sweep out in a graceful flare. Delicate raised lines and tiny flowerets on both the front and back of the handle accentuate the smooth curves of the pattern. All elements are perfectly balanced, which makes Chippendale so classic and enduring. The Chippendale design name comes from the sterling silver maker who designed the pattern.

No matter what pattern you prefer, sterling silver trays are a timeless and elegant addition to any tea set or silver collection. Additionally, if you keep your sterling silver trays in good condition, they can remain valuable for many years, benefiting future generations of your family. Besides the hallmarks and specific patterns described above, sterling silver trays especially may also come with date marks that reveal information about the year in which the tray was made. This is especially true for silver trays from the United Kingdom and Ireland. While it is not a legal requirement in the United States to have a date mark, some U.S. silverware companies include dates or silver markings on their trays anyway. The dates are a great way to determine if a silver tray is antique or if it was recently manufactured, all of which impacts the value of a tray, beyond examining the condition. The larger the tray, the better as well in terms of value.

If you have any of the valuable sterling silver trays listed above, it is important to note that the those in a top quality condition will fetch more money than those that are clearly damaged or used. Monograms also tend to devalue a set. With those notes in mind, as a leading Sarasota antique buyer, we are happy to take a look at any antique sterling silver trays that you may have for appraisal in cities like Lakeland, Tampa and Venice. Our expert team is well-versed in many different antiques from all over the world. We buy antiques of all variety. If you want to know the value of your antiques, bring them in for appraisal and we can tell you all about the sets that you have.

Christofle Silver Marks | Is this Christofle? how old? | Marks & History
The History of Gorham Silver Co.
How Much Is Your Sterling Silver Tea Set Worth?
Tips on How to Sell Your Antique Silver Tea Set