The 5 Most Sought After Sterling Silver Tea Sets

If you are in the market for a tea set, or if you have one that you would like to sell, check out some of the five most sought after sterling tea sets. 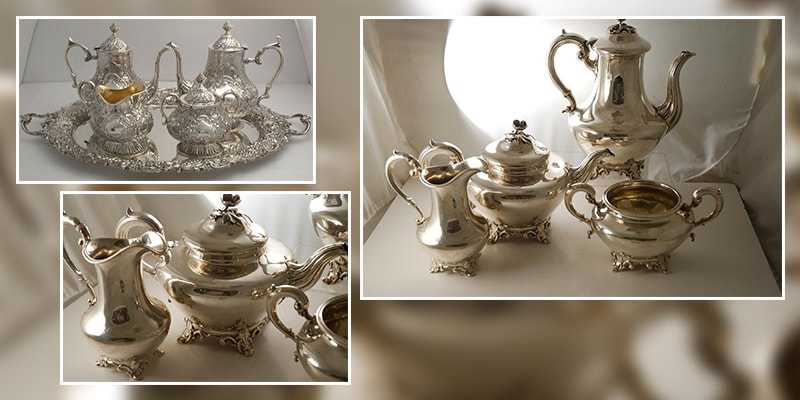 While there were many patterns, all with varying degrees of popularity, none of those patterns were as enduring and desired as Chantilly. To this day, the Gorham Chantilly has become one of Gorham’s most famed flatware patterns and matching flatware has been made in both sterling and silver plate. The pattern was created in a Louis XV style. For three years after Gorham’s Chantilly was created, it was selected nationally as ”the runaway favorite design.”

The Stieff Company was very well known for the quality and value of its silver products along with the beautiful hand chasing & Repoussé work. The most famous pattern that was developed by Steiff was the Maryland Rose, developed and introduced in 1892. The Maryland Rose pattern later became known as Stieff Rose. The Steiff Rose sterling silver tea set typically has four, beautiful and ornate pieces. Because of the ornate designs and intricate patterns, the Steiff sterling silver tea sets are very desireable and sought after, one of the most famous in the antique tea set world.

Gorham Manufacturing Company is one of America’s largest manufacturers of sterling silver items and sculptures. Through the years, they have developed many patterns and sets that have become highly desired throughout the world. The Plymouth Sterling Silver Tea Set is one of the many patterns by Gorham that has reached that extremely desired level. The complete sterling silver tea set typically has a coffee pot, teapot, cream jug, covered sugar bowl, and waste bowl. The pattern was developed in 1911 and consists of a clean, simple and elegant design. When trying to purchase a Plymouth sterling silver tea set, the quality and value is always more when there is clearly no damage or tarnish to the tea set.

The Georgian Rose Sterling Silver Tea Set by Reed & Barton is a mid-20th century sterling silver coffee and tea service set. The pattern was released in 1962 after Reed & Barton developed the set to accompany the Savannah flatware pattern. Both of the patterns consisted of polished surfaces that are accented with flowers and scrolls, and both patterns were designed to celebrate traditional Georgian elegance. The five-piece collection includes a sterling silver coffee pot, a teapot, a creamer dispenser, a covered sugar dish and a oval silver serving tray.

For more than 150 years, the Reed & Barton produced sterling silver of exceptional quality. Reed & Barton operated between 1824 and 2015 as a prominent American silversmith manufacturer based in the city of Taunton, Massachusetts. While operating, they produced goods such as sterling silver and silverplate flatware.

The Tiffany Repousse Tea Set in the ivy pattern is a rare pre-Civil War five piece silver set that was developed by Tiffany & Co. The pattern consists of richly detailed repousse of winding ivy leaves and additional decorative accents. The background of the design is fully textured with minute detail. Additionally, all of the handles and spouts display a woody motif that is accompanied by oak leaves and acorns.

Each piece in the ivy pattern repousse tea set has an engraved crest that consists of a shield that is surmounted by a boar’s head, along with a sword that is entwined by two serpents along with a banner that reads “Est Nec Astu.” The set typically includes a large coffee pot, a medium tea pot, lidded creamer, lidded sugar and a waste bowl. Pre-Civil War era silver is rarely seen on the market, and it is especially rare coming from an important maker such as Tiffany & Co.

If you have any of the sets listed above, it is important to note that the full sets will fetch more money than an incomplete set and that extra pieces are a plus. Furthermore, the condition of your sets is key in getting the best price. Monograms tend to devalue a set. With those notes in mind, as a leading Sarasota antique buyer, we are happy to take a look at any antiques that you may have for appraisal and value. Our expert team is well-versed in many different antiques from all over the world. We buy antiques of all variety and we have the most successful record of buying antiques in cities like Tampa, Englewood and Palmetto . If you want to know the value of your antiques, bring them in for appraisal and we can tell you all about the sets that you have.

How Much Is Your Sterling Silver Tea Set Worth?
The 5 Most Sought After Antique Sterling Silver Bowls
Five Must-Have Antiques For Your Holiday Meals
Silver Facts: Quick Facts About The Chinese Antique Silver