The 5 most valuable sought after sterling silver flatware patterns 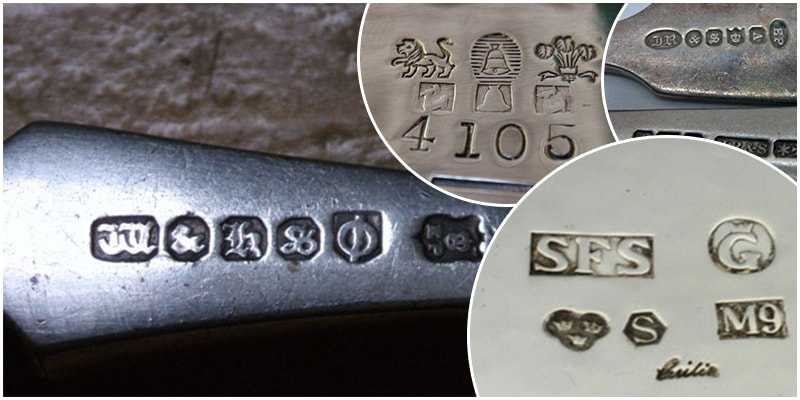 The Grande Baroque sterling silver flatware is a pattern that is produced by Wallace Silversmiths. The pattern was specifically created by William S. Warren, in 1941. Overall, it took Warren four years to develop and perfect this pattern and he did so with the mission of the design “to reflect the very essence of merriment and adventure, of artistic progress.”

When Warren originally began designing the pattern, the intent was that it was only meant to be a flatware pattern but then, later on, hollowware was added to the collection line. Then, once the demand for the Grand Baroque pattern increased, a Golden Grande Baroque was introduced. Besides the traditional place settings in lunch, dinner, and continental size, there are now over a hundred flatware pieces in the Grand Baroque pattern. 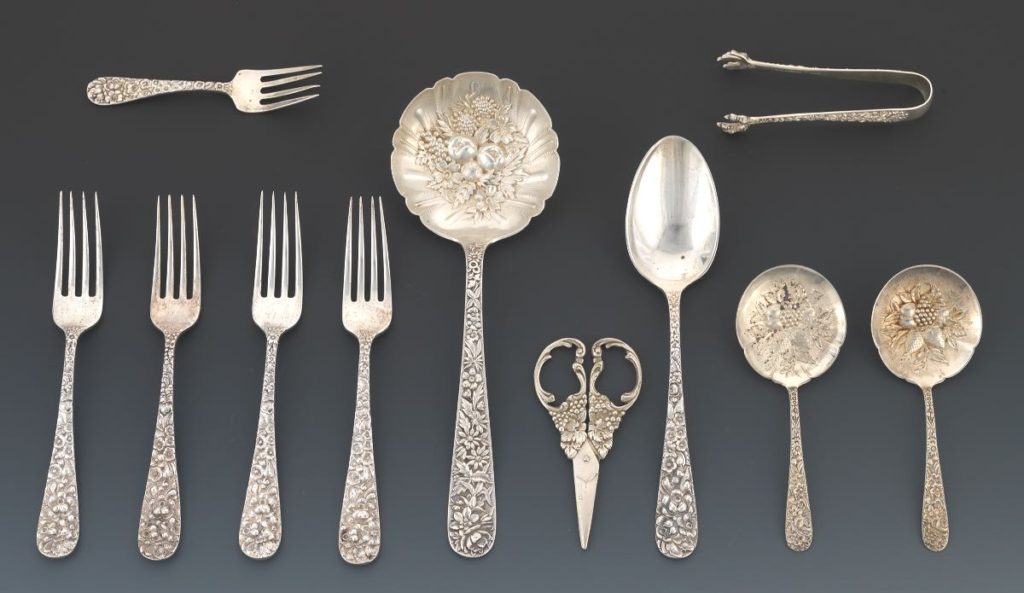 The sterling silver flatware pattern Repoussé by Stieff was introduced in 1845. The hollowware pattern Repoussé was introduced in 1828 and features an intricate floral design along its entire stem and handle. To develop the design that made the Repoussé pattern so unique, the relief design, the pattern has to be pressed through the back of the item. This pattern was named after the art of repoussé (the process of embossing metal from the back by hammering), originally used in European silversmithing. What is also a key trait in this pattern is that Repousse sterling silver flatware pattern is flat on the opposite side. Because of the intricacy of the pattern and the work that it takes to develop the flatware, the Repousse by Stieff is highly desired and sought after. 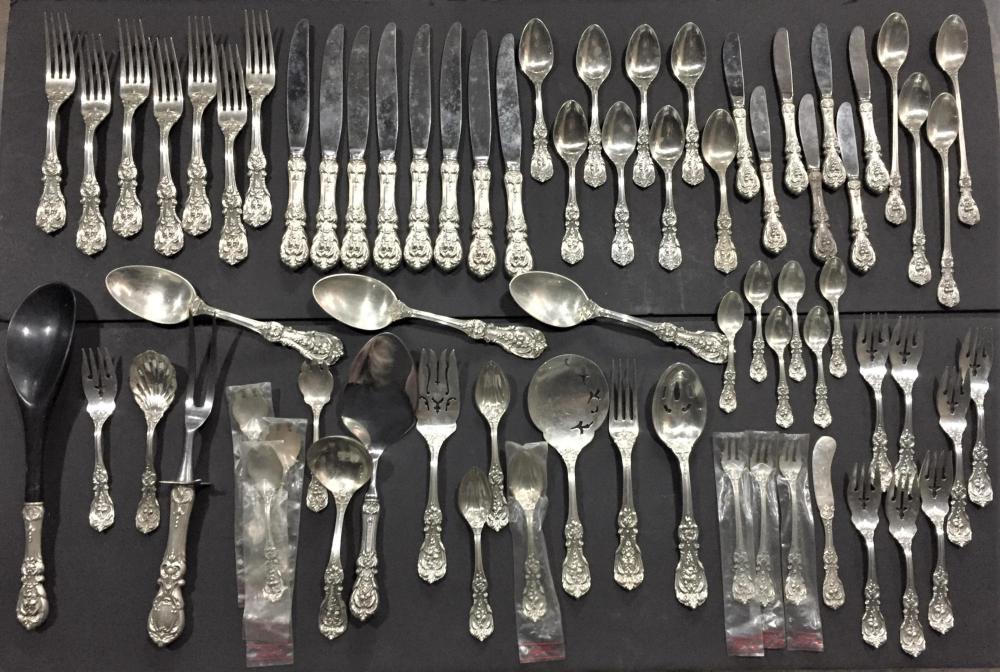 The Francis 1st by Reed & Barton flatware pattern is an American sterling silver tableware pattern, that was introduced in 1906. The Francis 1st pattern was designed by Ernest Meyer, a French silversmith. The pattern was named after King Francis I of France. Meyer’s goal was to create a pattern that surpassed the Renaissance-Baroque metalwork of Benvenuto Cellini. Cellini was a court artist and sculptor in the court of King Francis I, who ascended the French throne in 1515.

Identifying the Francis 1st pattern relies on the uniqueness of the design. Unlike many other flatware patterns, the Francis 1st pattern has fifteen different fruit-and-flower clusters and each of the handles contains one of these detailed designs. Many claims that the design idea was inspired by many tableware patterns of the Italian silver manufacturer, Cesa 1882.
To identify the pattern, the original backstamp featured a lion, an eagle, and the letter “R.” Around 1950 a new back stamp was used and that read “Reed and Barton.” 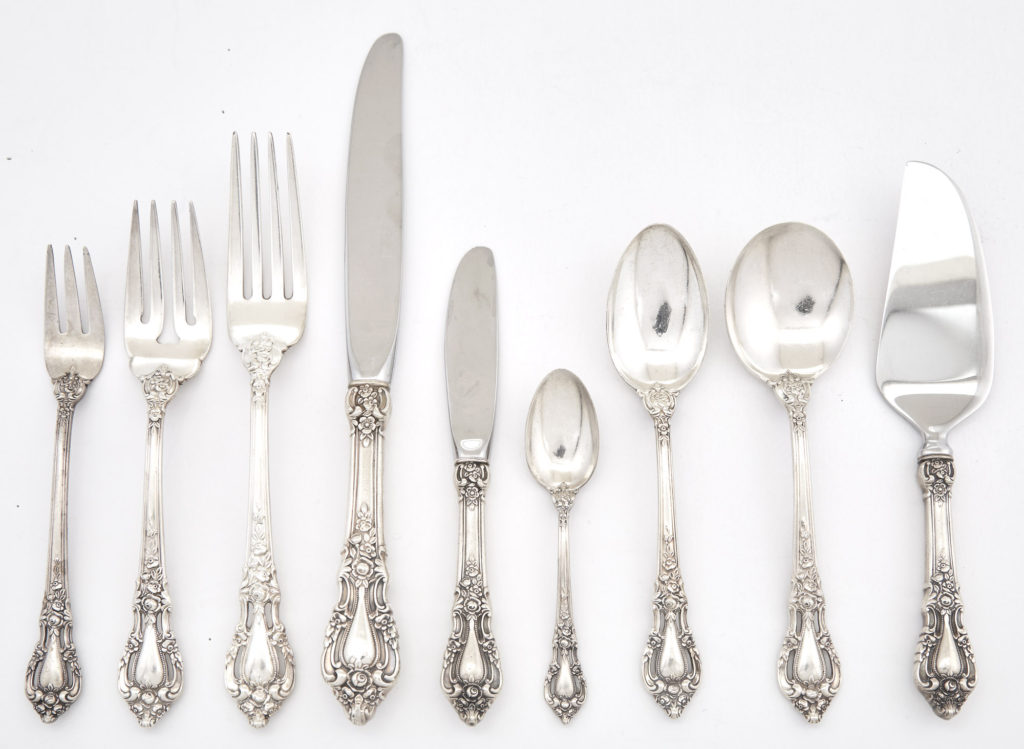 Lunt Silversmiths sterling silver is known for the unique design elegance that its patterns have and it has been part of the Lunt family heritage since the early 1900s in Greenfield, Massachusetts. Beyond the elegance, Lunt sterling silver has a variety of patterns over years of existence, all patterns representing outstanding quality and craftsmanship, like their Eloquence sterling silver pattern. Eloquence was debuted in 1953, and it is considered a”flagship” pattern for Lunt. The pattern consists of wonderfully ornate handles that are pierced in four places, which isolates the plain center, making it stand out in elegance.

Lunt and Bowlen Company took over A.F. Towle Co. in 1902, which had original sterling patterns dating back to 1883 that became a part of Lunt sterling flatware. In 1935, they changed their name to Lunt Silversmiths. 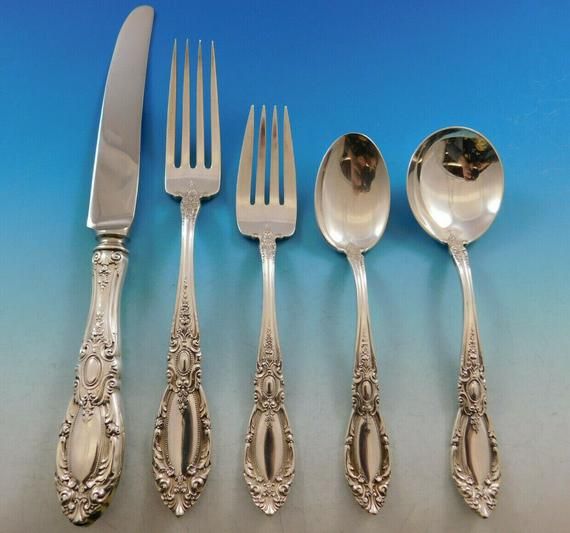 The sterling silver King Richard set consists of a pointed oval top and a richly ornamented shield in the center of the handle. The design of the handle takes so much time to be modeled that it seems to be more deeply and finely carved than any pattern that is comparable. King Richard’s design inspiration simply sets it apart from all other decorated patterned sterling silver.

If you have any of the sets listed above, it is important to note that the full sets will fetch more money than an incomplete set and that extra pieces are a plus. Furthermore, the condition of your sets is key to getting the best price. Monograms tend to devalue a set. With those notes in mind, as a leading Antique Buyer, we are happy to take a look at any antiques that you may have for appraisal and value. Our expert team is well-versed in many different antiques from all over the world and we frequently visit places like Osprey, Englewood, and Ellenton. We buy antiques of all variety. If you want to know the value of your antiques, bring them in for appraisal and we can tell you all about the sets that you have.

Top Bought and Sold Antique Silver Pieces for Ideas | Antique Gift Ideas
Tips on How to Sell Your Antique Silver Tea Set
Antique and Collectible Silver Flatware- St. Petersburg | Miami | Tampa | Orlando | Bradenton
Silver Markings: What do they Mean and How do I find Out