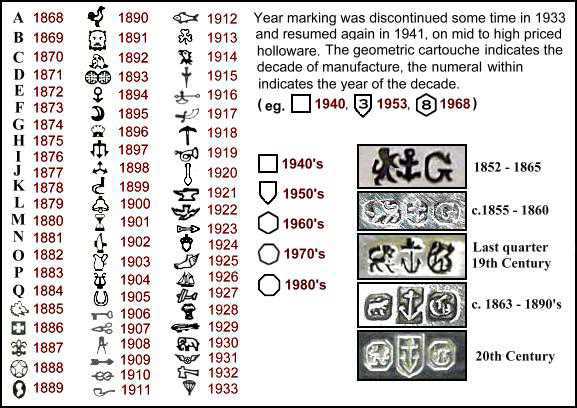 Knowing when you have Gorham Silver- The Gorham Manufacturing Company is one of America’s largest manufacturers of silver-plate and sterling pieces, along with a foundry for bronze sculpture. Gorham got its start in 1831 with Jabez Gorham in partnership with Henry Webster. The two founded the silver company in Gorham’s hometown of Providence, Rhode Island. Their beginning was as a manufacturer of coin-silver flatware, in which Gorham started to gain acclaim, especially in 1859, when the flatware was selected by Mary Todd Lincoln for the White House. In 1863, Gorham was a major player in plated silver. In 1868, they made the switch from coin silver to sterling silver and produced everything from knives, forks, and spoons, to other desired pieces such as coffee pots and serving bowls. Again, highly desired by several White House administrations, Mrs. Ulysses S. Grant asked Gorham to commemorate the country’s one-hundredth anniversary with a spectacular century vase.

Because Gorham’s intentions were to manufacture multiple versions and examples of its designs, there was also a high demand from customers who wanted unique objects. These demands resulted in Gorham assigning production numbers to its products from the early days in the 1850s. Let’s delve deeper into the Gorham sterling silver identification process over time.

Being able to identify a piece of sterling silver, whether it is a silver plate mark or a tea set, as a Gorham piece is fairly simple thanks to the consistent silver markings that were used during the manufacturing of the pieces. Dating a piece of Gorham silver is a question of decoding the hallmarks on the back or bottom of each piece.

Hallmarks on the silver pieces were not consistent in the first few years. In 1848, Gorham’s silver marks consisted of a lion, an anchor, and the letter “G.” Then, from 1848 through about 1860, the lion markings faced left, but instead of their previous direction, facing right. Sterling tea sets and some other hollowware items manufactured by Gorham, were assigned numbers in a decimal sequence. For example, the earliest tea set design was assigned the number ten, the second tea set was assigned the number twenty, and so on. From 1857 to about 1870, there were variations within those numbers available to customers. A great example of this is known as the Mary Todd Lincoln set, or the #30 design tea set, first made in 1857. Variants with the chasing and engraving in the pattern and design would then result in the pieces being numbered 31, 32, 33, 34, and 35.

When it came to dating the pieces by the year, Gorham embraced the sterling standard in 1868, and marks for each year were added. Pieces created between 868 and 1884 were marked with capital letters. Then, from 1885 to 1933, icons were used, such as a wolf’s head or a parachute. Following a six-year gap, Gorham made decades identifiable by a polygon, with the number of sides on the polygon representing the decade that it was—four for the 1940s, five for the ’50s, and so on, and labeled with a specific number inside the polygon for the actual year.

As a leading Sarasota area antique dealer and buyer, we are happy to take a look at any pieces you may have that you are questioning if they are a Gorham piece or not and give you an appraisal and let you know their value value. Our expert team is wide-spread in cities like Venice, Bradenton and Ellenton.

We are well-versed in many of the different designs and sets, from identifying Gorham silver plate marks to Gorham sterling tea sets. If you want to know if you have a Gorham piece on hand and what the value of it is, please set up an appointment, we make regular calls in Osprey, Sarasota, Venice, Palmetto, Nokomis, Englewood, Bradenton.

Silver Markings: What do they Mean and How do I find Out
The History Behind Repousse Antiques
Antique and Collectible Silver Flatware- St. Petersburg | Miami | Tampa | Orlando | Bradenton
The Best Way to Burnish and Clean Silver: 4 Home Remedies Put to the Test