The History of Gorham Silver Co.

Gorham Silver Co. is one of the largest American manufacturers of sterling and silverplate. It’s long history and beautiful pieces make it one of the most well-known manufacturers in the entire world. It’s resume of historic commissions and recognition in notable events around the world are as interesting as they are impressive. 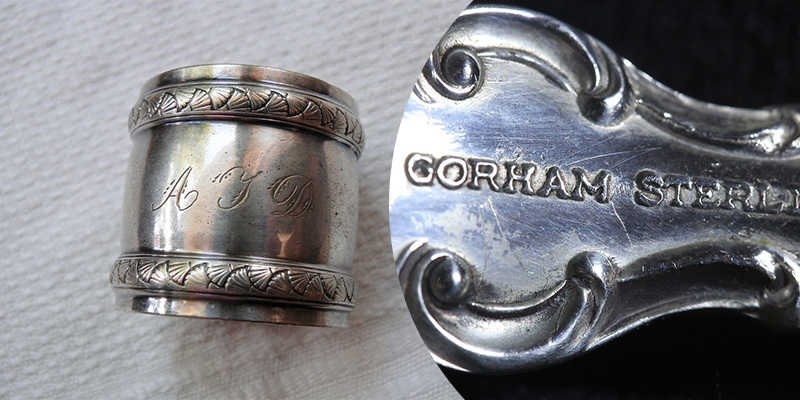 Jabez Gorham founded Gorham Silver in Providence, Rhode Island in 1831 in partnership with Henry L. Webster. The firm made products such as thimbles, combs, jewelry and other small items with a chief product of spoons of coin silver. Shortly after Gorham’s start, in 1842, Congress enacted a tariff that blocked silverware imports from outside of the United States. By doing this, Congress drastically helped improve the health of the silver industry in the United States. Jabez Gorham didn’t take full advantage of the opportunity and ended up passing the company onto his son, John, in 1847.

It was John Gorham who took Gorham Silver to a more competitive level in the United States. John brough mechanized production techniques and methods that in turn, helped to increase the company’s presence in Providence and expand its production line. To further advance the company, John went to Europe to tour silver workshops and manufacturing facilities. He spoke to specialists, high skilled workmen, master craftsmen and toolmakers. From there, he sought after George Wilkinson to come to the United States and train his American workers. Wilkinson was a premier designer who Gorham knew could really make a difference in the company.
In 1884, Gorham opened a store in Ladies’ Mile shopping district in Manhattan but then moved to Fifth Avenue building in 1905. A year later, Gorham purchased Kerr & Co. which was a rival company from New Jersey. In 1967, Textron purchased Gorham which faced a lot of criticism from the experts. Many claim that this move decreased the quality of Gorham’s high-quality sterling silverware products. A few sales later, Textron sold Gorham to Dansk International Designs, Brown-Forman Corporation and then Department 56.

William C. Codman is one of Gorham’s most noted designers and was the creative mind behind one of Gorham’s most well known flatware patterns that has been produced in both sterling and silverplate. Beyond Codman’s popular designs, Gorham had many notable collections and commissions.

The White House commissioned Gorham’s silver services on several occasions and through several administrations. Mary Todd Lincoln bought a very impressive tea set flatware service that was to be used in the White House in 1859. In 1957, that tea set was presented to National Museum of American History. Mrs. Ulysses S. Grant asked Gorham to commemorate the country’s 100th anniversary with a Century Vase that was made of more than 2,000 oz of sterling silver. Most recently, The George W. Bush family chose Gorham’s Chantilly as the flatware service on Air Force One. Later in the 19th century and in the early 20th century, the production of silver nearly increased four times over. This is partly due to the fact that silver plate pieces were made more affordable and therefore were more accessible to a wider consumer base beyond the typical well-to-do.

Notable events that Gorham had a hand in designing include the Borg-Warner Trophy which is given to the winner of the Indianapolis 500 which was designed by Robert J. Hill.

Gorham’s markings are all fairly similar even as the decades have gone on. Consistently the marks have included a lion, anchor and the letter “G.” 1933 through 1941, Gorham discontinued the use of marking the years on mid to high priced holloware. When years were included on the markings, there was a geometric cartouche that would indicate the decade that the piece was manufactured.

If you have a piece of sterling silver in your collection that you think might be a piece from Gorham but you aren’t positive, one of our experts at Sarasota Antique Buyers is more than happy to help you out and tell you the story of your silver. Our team of experts is wide-spread in cities like Tampa, Osprey and Bradenton. You can call us and will fix an appointment of yours with them as soon as possible.